The CRCSI commissioned the first independent comprehensive study of the impact of spatial information on the Australian economy, by ACIL Tasman. The report examined the contribution of spatial information and its technologies to GDP, consumption, employment and export revenue. Analysis of five CRCSI projects contributed to the conclusions of the report. 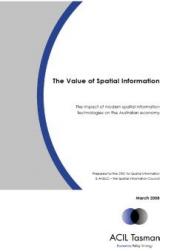 The report found that the current economic impact of the spatial industry in Australia was a cumulative gain of between $6.43 billion and $12.57 billion in Gross Domestic Product in 2006-07, equivalent to between 0.6% and 1.2% of GDP. Conservative estimates for the value of the industry were made based on proposed productivity shocks to various sectors of the economy. The report gave credibility and vision to discussions in the industry, and gave SIBA the springboard to raise awareness of the huge potential of geospatial technologies were they to be fully implemented in end-user sectors.