Associate Professor Ge’s position is jointly funded by the [then] NSW Department of Lands, the CRCSI and UNSW

Quick action by CRCSI researcher Professor Linlin Ge and his UNSW team provided, through international collaboration, vital real-time information on the Sichuan earthquake to the Chinese rescue efforts. This was recognised by the highest Asia-Pacific Spatial Excellence Award for 2008.

CRCSI experts assisted Chinese authorities with the analysis of dramatic satellite images of ground distortions of up to five metres following the 2008 May 12 Sichuan earthquake.

The image analysis project is critical in assessing the magnitude of quake-induced ground movement and the potential for further landslips and damage to structures. A subsequent aftershock collapsed 420,000 houses and injured dozens in south-west China.

Led by CRCSI Spatial Information Professorial Fellow, Dr Linlin Ge, the UNSW based team was among the first expert groups in the world to generate a ground displacement map, and was the first to supply analysis direct to the Chinese authorities.

Associate Professor Ge said the Chinese Earthquake Authority can overlay the images provided onto satellite photos to assess damage around buildings or bridges.

“The larger the ground deformation, the more likely the structures will be damaged,” he said. The team's analysis is taken from satellite images captured on May 20 by the Japanese ALOS satellite, which orbits the Earth every 46 days.

Detailed satellite imagery could play a critical role in reducing earthquake casualties if additional satellites were deployed to capture images more frequently, according to Associate Professor Ge.
Given the two to three day build-up of pressure before land slides, a purpose-built network of satellites orbiting every two days could predict slope failure and anticipate aftershocks by picking up even small ground movements, he said.

“When you see cracks in the ground that can be too late – with remote sensing you have more time to raise the alarm or evacuate.”

In 2007 the CRCSI entered a landmark research agreement with China’s Centre for Earth Observation and Digital Earth, at the Chinese Academy of Sciences, to strengthen capacity for earth observation, mapping and monitoring of ground displacement. 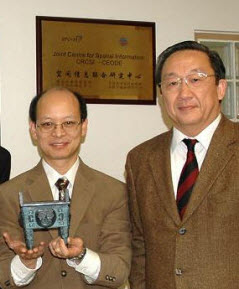 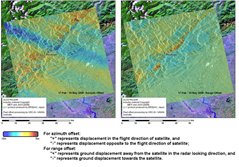