Established with 43 SMEs in 2004, membership of 43pl has now grown to 60. The annual cash commitment of 43pl members has almost doubled. In-kind contributions are also more than twice the level promised at the CRC’s establishment.

Two start-up companies have been formed from CRCSI activities. Our independent KPMG survey of financial performance of 43pl companies shows them outperforming industry norms. Clearly we are succeeding in diffusing technology through an emerging industry sector, and holding the interests of a significant proportion of the entire Australian spatial industry for over five years now.

43pl and the CRC for Spatial Information won the STAR Award for Small Business Engagement from the CRC Program.

“The CRCSI role has not been limited to research, it has also provided commercialisation support, networks of contacts, input to Board discussions, and ongoing business credibility. No CRCSI, no Scanalyse. Simple as that.” Peter Clarke, Managing Director, Scanalyse

“Most 43pl members would not have participated in large scale, cooperative research programs without a 43pl mechanism… 43pl remains of paramount importance as a vehicle to gain SME engagement in the CRCSI’s research, to provide a path for adoption of the CRC’s research findings to gain user input to the strategic planning and conduct research.” Independent Survey of End-User Participants

“Involvement in a number of research projects have significantly benefited Spatial Vision - enhancing our expertise in key technologies; the opportunity to work closely with existing and new clients, and generally raising awareness of our company by being associated with the CRCSI." Glen Cockerton, Managing Director, Spatial Vision 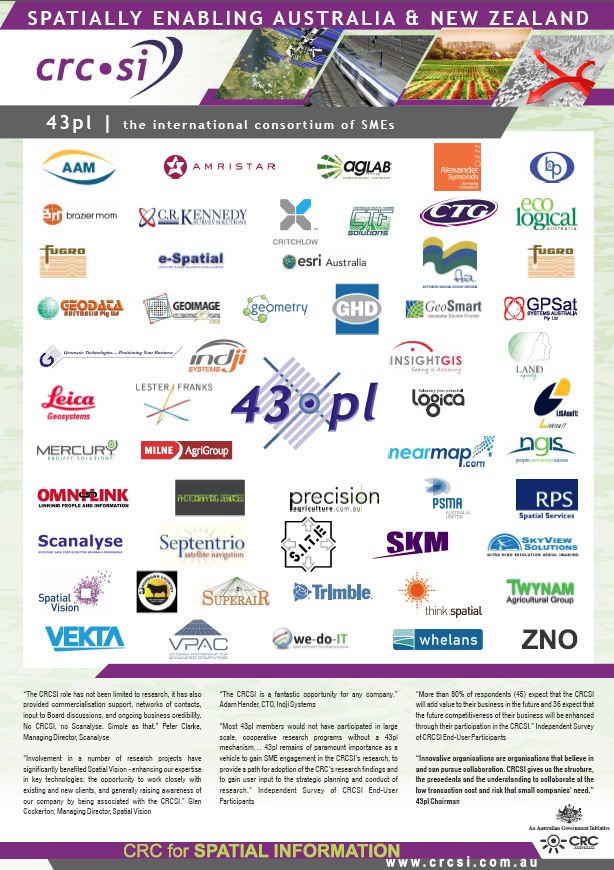