In June 2008 the then Minister for Climate Change and Water, Senator the Hon Penny Wong, announced $2.8 million in funding for three new projects to help Australia's vulnerable coastal communities plan for the effects of climate change. $2 million was allocated to the Urban Digital Elevation Modelling (UDEM) Project to map key urban and industrial areas which may be subject to inundation due to the impacts of climate change or storm surge. 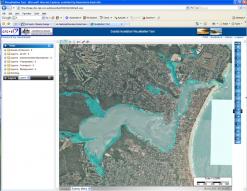 The Project was managed by the CRCSI in collaboration with Geoscience Australia and ANZLIC on behalf of the Department of Climate Change and Efficiency. The project was also supported by five government agencies and seven private sector companies. It remains an outstanding example of a large collaboration uniquely assembled by the CRCSI and is expected to continue through subsequent phases.

The Urban DEM project attracted 16 initial partners. These are: