The project demonstrated Australia's unique role and capability in this satellite data processing, releasing information from space sensors previously not available to the science and policy communities 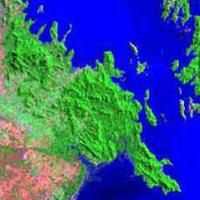 It resulted in international standard infrastructure for delivering Australia's Earth Observation data, and the delivery of satellite imagery based environment data in a usable form.

The Landsat Program is the longest running satellite series for imaging Earth from space. The first satellite in the series was launched in 1972.

The project developed the processes, the underpinning standards and infrastructure to standardise the information products from the Landsat Archive. As the products are published, managers and scientists will have easy access to consistent baseline information of Australia to monitor and predict the impact of natural and man-made changes on the Australian environment as a whole.

The National Nested Grid specifications, on which the Australian Reflectance Grid 25 is based, is a particularly significant achievement as the first Australian (ANZLIC-endorsed) standard that allows data from different jurisdictions to be generated/re-sampled to a consistent grid ready for integrated modelling and analysis on a regional and national scale. That is a significant saving in data preparation and collation costs.

The Raster Storage Archive is a low cost, scalable raster data storage software developed between the CRCSI and the ULA Program that supports academic and operational management of raster data in resource/environment monitoring, reporting and modelling.