Satellites orbiting more than 20,000km above the earth’s surface are now trying to locate and record what lies beneath in a new trans-Tasman initiative spearheaded by Christchurch geospatial technology company Orbica.

Orbica and partner Reveal Infrastructure are trialling a ground-breaking satellite-based augmentation system (SBAS), funded by the Australian and New Zealand governments, to see if it can pinpoint underground assets that have been dug up in urban environments - such as waterpipes - with a margin of error less than 0.5m, and down to 0.1m or even better. If successful, traditional surveying of those assets could potentially be supplemented with mobile devices. That could revolutionise the utilities infrastructure industry Orbica CEO Kurt Janssen said.

“Here’s the thing: often underground asset data has a large positional margin of error. Five metres is not unheard of, and the lack of understanding about the level of accuracy in digital asset records causes many headaches for the utility owner and wider community, including health and safety risks. But if you can collect asset information easily with modern mobile equipment, within a spade’s width accuracy (30cm or less), everything changes.”

It would enable companies and organisations that manage underground assets to accurately record their location without paying for costly survey grade equipment unless millimetre accuracy is required. 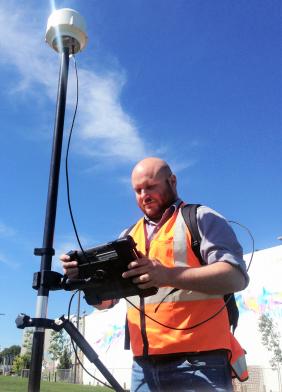 “It’s about democratising the accuracy and precision of data,” said Janssen. “For the average person on the street, it has the potential to reduce end-user costs for utility services due to reduced costs in the infrastructure industry and decreased health and safety risks for the public and those working in the utilities construction and maintenance sectors.”

Orbica location data specialist Andy Holt headed up the initial field trials in December in partnership with Reveal Infrastructure. The field team observed a geodetic marker at Cashmere Lookout for a point of reference and comparative analysis. Then they tested the accuracy and precision of the satellite signal at three locations on Cashmere High School’s grounds, including the cricket pitch, starting some days at 4am to avoid clashes between the expensive equipment and a cricket ball.

They set out the points of Orbica’s logo, and tested those same points over time to ascertain the accuracy of the satellite signal. Reveal Infrastructure then used traditional survey methods on the same positions to compare with the SBAS results.

“We’re seeing some interesting results that raise interesting questions, which is what we love as location data specialists,” Andy said. “The next stage of the SBAS project should give us some clarity about what those results mean.”

Geoscience Australia is collaborating with Land Information New Zealand (LINZ) on a two-year project to improve the positioning capability of both countries. The New Zealand Government has contributed an additional $2 million to the initial $12 million in funding from the Australian Government. The 30 testbed demonstrator projects are being trialled across Australasia in 10 industry sectors. The Cooperative Research Centre for Spatial Information (CRCSI) is managing the projects and is overseeing the evaluation of the effectiveness of an SBAS for the region, and building expertise within government and industry on its transformative benefits.